Welcome back!  I know we said we probably wouldn’t be able to meet up today.  However, our appointment went well this morning, and BDH and Little Buddha were adamant about saying hello, so we’ve shuffled some things around, and here we are!  How are you all doing with the time change? Between that and staying up late for the Patriots game last night, I feel like I have jet lag today.   I’ve also already run out of patience with the 4:30 sunsets, so this could be a challenge.  The guys tell me not to worry about it.  They remind me that this happens every year, and we find a way through it every time.  I’m so lucky they’re here, and that they made coffee.  There’s a fresh pot on the table, so grab yourself a nice medium DD, and let’s clear out some Monday Clutter.

(As always, if you’d like to support our coffee budget, please consider using the Clutter Amazon page for your shopping needs and encourage your friends to do the same.)

Donald Trump apparently doesn’t think the media should be covering the impeachment inquiry, and he just can’t understand why no one will take him at his word that there’s no need for the inquiry in the first place.  Didn’t we all see the perfect transcript (that showed his corruption) that he released?  He’s like the little kid who gets caught with his hand in the cookie jar, looks right at you and denies he was trying to eat all the cookies.  We miss the days when the White House had a reality-based occupant.

Donald Trump insists written answers from the Ukraine whistleblower aren’t good enough, although they were just fine for him when it came to the Mueller investigation.  Once a con man, always a con man.

When he’s not obsessing about his upcoming impeachment, Trump is keeping himself busy by attacking California officials for the current fires in the state.   Trump threatened on Sunday to cut federal wildfire aid for California, and he again put forth his idiotic idea that the forests need to be “cleaned.”  Governor Gavin Newsom responded to Trump’s nonsense by tweeting, “You don’t believe in climate change. You are excused from this conversation.” 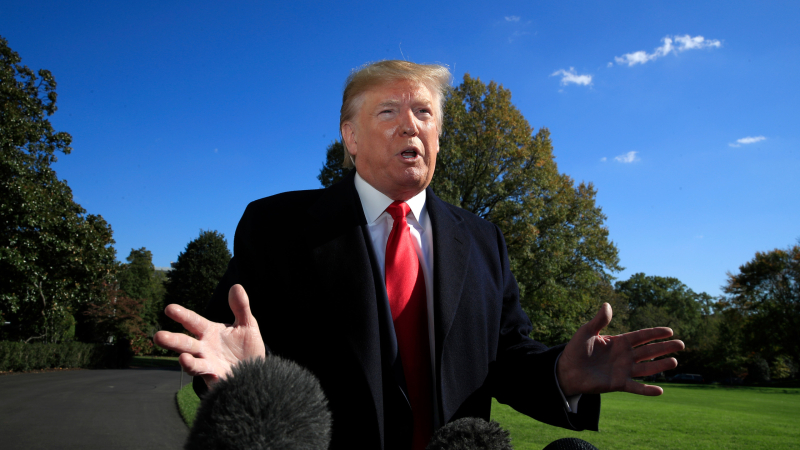 This is who the GOP is defending – an overgrown man-child who hates this country. (pic via 8newsnow.com)

Former President Jimmy Carter says he is “completely at ease with death.”  It’s greedy to ask, but we hope that the 95-year-old Carter will still be with us for a while to come, as he continues to be a shining example of how to lead a good life.  There isn’t enough of that in the world these days.

The folks at Morgan Stanley see a rough decade ahead for stocks and bonds.  The Clutter investment team has no idea if this will prove to be correct, although they feel like they’ve read this story a few times over the last five years, and it hasn’t been right yet.  They don’t trust predictions like this any more than a long-range weather forecast.  However, no matter what the “experts” are saying at any given time, it’s important to remember that all investing should be done with a long-term perspective, so don’t use money that you’ll need back in fewer than five years.

The New England Patriots had their first test of the year last night, and it did not go well.  The Patriots lost 37-20 to the Baltimore Ravens for their first defeat of the season.  Things got off to a bad start when the Ravens marched right down the field for a touchdown on the first drive of the game.  The vaunted New England defense suddenly looked like a high school team, as Ravens quarterback Lamar Jackson and company sliced through them with ease.  There were also a couple of uncharacteristic New England penalties, and before you knew it, the score was 17-0.

The Patriots did their best to slow down the damage on both sides of the ball.  They pulled to within a 24-20 score after three quarters, but Baltimore finished them off with 13 unanswered points in the fourth.  The Pats have their bye this weekend, so they’ve got two weeks to try to get some more players back and regroup before they face the Philadelphia Eagles on the road.   For an 8-1 team, this team is still very much a work in progress.

Congratulations to Mookie Betts on winning his fourth consecutive Gold Glove Award yesterday.  You can just hear his asking price for a new contract going up even more as we speak.  The Boston Red Sox will have a better sense of their position on a new deal for Betts after J.D. Martinez decides by 5:00 tonight whether or not to opt-out of his current deal.  We’re hoping Martinez is heading off to find a new home.  There’s no doubt he’s a terrific hitter, but he’s a glaring defensive liability in the outfield, and he just comes across to us as a mercenary with no connection to Boston.

You’ll never believe this, but Boston Red Sox minor league outfielder Rusney Castillo won’t be opting-out of the final year of his contract.  Who else is going to pay the guy $13.5 million, especially since he hasn’t been in the majors since 2016?  Thankfully, this is the last year of his 7-year/$72.5 million deal.

We asked a few weeks ago if it mattered that the Terminator was back again.  Apparently the answer is, not so much.  Terminator: Dark Fate had a bad opening weekend and could end up losing as much as $100 million.  It seems like it might be time to finally retire the franchise.  At the very least, it needs a reboot with a different story than “a Terminator travels back in time to kill one person to prevent the humans from beating the machines in the future,” but it can’t be as dark as Terminator: Salvation.  Ahh forget it, just retire the thing, already.

Okay kids, that’s going to do it for now.  We had a chance over the weekend to watch Jakob Dylan’s 2018 documentary, Echo in the Canyon, about the folk-rock music scene in California in the mid-late 1960’s.  The soundtrack was terrific, and let’s wrap things up here with one of the tunes from the film.   We give you The Mamas & The Papas with, “Monday Monday,” for today’s, “Song of the Day.”

Thanks for stopping by, everyone.  We’re so happy we were able to connect with you.  Enjoy the rest of your day, be good, and we’ll do this again soon.  Until next time, that’s today’s Clearing out the Clutter, and we are outta here.