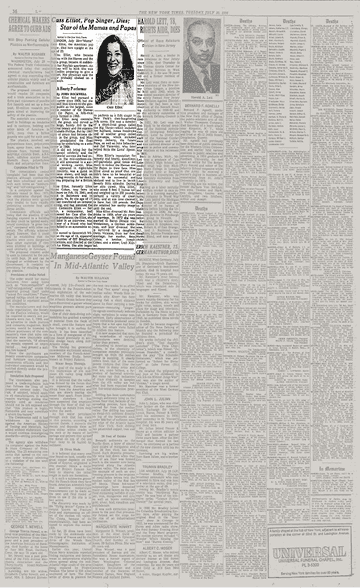 See the article in its original context from

TimesMachine is an exclusive benefit for home delivery and digital subscribers.

This is a digitized version of an article from The Times’s print archive, before the start of online publication in 1996. To preserve these articles as they originally appeared, The Times does not alter, edit or update them.

Occasionally the digitization process introduces transcription errors or other problems. Please send reports of such problems to

Miss Elliot, who became famous with the Mamas and the Papas group, became ill.suddenly in her. Mayfair apartment. An autopsy will be held. She was in London preparing to give concert. Her physician said the singer probably choked on sandwich.

Miss Elliot had pursued solo career since 1968, but she was still best known to the general public as the largest, most visible member of the Mamas and the , Papas, a folk‐rock group formed in 1965.

Miss Elliot sang contralto with the, group, and served as the large, homey foil to the ethereal beauty and the soprano of Michelle Phillips. But by 1967 signs of strain had become obvious in the group, and Miss Elliot precipitated the final breakup by embarking on a solo career in 1968.

If it did not bring her the widespread celebrity and the commercial success she had en‐, joyed in the mid‐nineteen‐sixties, it still amounted to a successful working career. Miss’ Elliot appeared in nightclubs and concerts, was a guest on television shows,, and kept on producing records. At her death, she was preparing for a British tour.

Miss Elliot, formerly Ellen Naomi Cohen, was born in Baltimore on Feb. 19, 1941, and raised in Baltimore and in Arlington, Va. By the age of 17 she had manifested an interest in acting, and had assumed the name Cassandra. Elliot — her father, a restaurateur, had nicknamed her Cass after the Trojan prophetess; the Elliot, she said„later in an interview, was in honor.of a friend who had been killed in an automobile ac cident.

She moved to Greenwich Village at the age of 19, appeared in a number of Off Broadway productions, and directed at the Cafe La Mama. She. also began to perform as a folk singer in New, York’s then‐burgeoning folk scene. She was a member of a short‐lived group called the Big Three—which included her husband, James Hendricks and of another group called Mugwumps, which included Denny Doherty, the future Papa, as well as John Sebastian and Zal Yanovsky, who later helped form the Lovin’ Spoonful.

Miss Elliot’s reputation for honesty and hearty, sometimes self‐parodistic good times did much to endear the Mamas and, the Papas to their fans, Miss Elliot stood as proof that one didn’t have to be beautiful or thin to be successful and idolized and to live in lavish Beverly Hills splendor. During her solo career, Miss Elliot, who stood 5 feet 5 inches tall and weighed up to 250 pounds, pursued a variety of crash diets, and at one time claimed to have lost 120 pounds, But she retained her earthy image until the end.

Miss Elliot divorced Mr. Hendricks in 1969, after six years of marriage. In 1972 she was married to Baron Donald von Weidenman, a German nobleman, and later divorced. She is survived by a daughter, Owen Vanessa, from her first marriage; her mother, Bess Cohen; a brother, Joseph Cohen; and a sister, Leah KunLkel.